After 2 minute you can kill him. No explosion happens.

PS: It is possible to kill before that time but downside is you have to survive from explosion. Earlier you kill higher damage you take from explosion. Normal mode with 53.21 Mres took 970 damage for killing at 58 second.

Beginning of fight take position far from each other and don't stand on the middle areas. Tank should save "taunt" for drain phase only.

Arkham will cast  a mix of black and purple Pillars on each players feet (number of pillar spawn depend on player number). Players need to place them outer side of arena after 4/5 (preferably) pillar go to middle quick and a Black Hole will spawn outer side of arena at any random spot. This BH permanently moves around outer side only and keeps sucks you into it. BH can changes moving direction clockwise & counterclockwise. Touching BH means instant death. Tank needs to position boss opposite side of BH.

Every 20 second he spawn pillars. 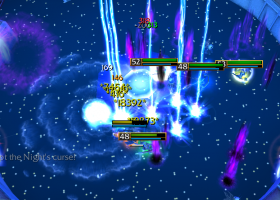 Arkham starts to heal himself quickly and drains mana (players only effected from mana drain). Use taunt to interrupt him. Arkham will stop moving that time, if players far enough they can avoid getting their mana drained and he wont able to heal himself. After some time later he will stop draining even if not taunted. 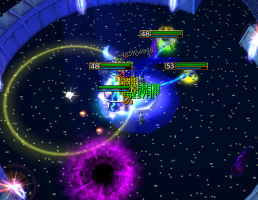 For each 2nd drain phase 2nd,4th,6th and so on. He summon a knight, this knight have to be killed asap. This knight can stun, charges toward players and push them which also stuns same time, cleave attack, critical hits. Stun & charge abilities can be annoying if BH is nearby.