Warp to "Inner Temple Corridor" and "Statue Fragment: Left Arm" will be spawn beneath your feet. 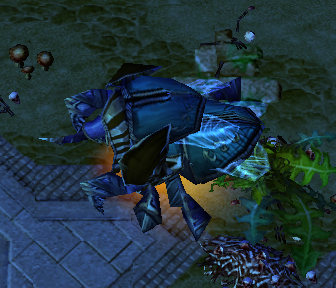 Before Starting & Things You Should Know

VX: Kill 4x mini at each corner first. "So painful... you must die!" VX trigger text. Be the last person to kill the boss when whose last turn to be eaten.

Non VX: Ignore minis and focus on boss only "Your Strength weakens...as times passes..." feel free to kill anytime. Only difference there is no hands at mini gh spawn phase.

After killing 4x minis, the tank should start kiting ghoul (while avoiding getting any hits from Ghoul) and damage dealers should not attack the boss until he's starting to jump. At the Jump phase "Time to eat... for me!" I will bite you, "player name" tank should not let the boss jump on him by kiting around the arena and staging close to walls while the rest of the team stay in middle and avoids getting caught by Ghouls AoE jump damage OR caught by ghoul himself if you get caught you will unable to do anything and boss auto-attacks will kill you "not to mention ghosts flying towards the gh will also hit you". Only during the jump phase, everyone gets arena degen (depends on difficulty degen also gets heavier) so healers can't heal anyone throughout the phase. The only way to survive this is by using HPS Elixir/Healing Scrolls/Healing Potions/Shadow Shaman's Q skill/Medicaster's R skill.

After the Ghoul makes its final jump, it becomes 4x black ghoul. You need to burst as much as you can because Ghoul does take more damage during this phase. You have 12 seconds to burst before the ghoul leaves the arena. The tank should aggro before Ghoul leaves the arena. Keep boss hp lower as possible stop at before you exceed remaning of his HP if you do more dps hes hp will reset to 10k each time. Even if you dps black ones main body will receive damage too.

After Ghoul leaves the arena a BLUE thing will spawn in the middle of the arena and mini ghouls will be spawning at one of the corners.

Mini Ghouls: In a total of 5 minis will spawn, each of them has a temporary 20k base attack damage buff, lasts 4 second. You can notice a reddish/orange color on them means they still have the buff. Mini spawns depend on what corner is the closest to the majority of players. The location of eaten players is also related to mini spawns. Only after all minis killed boss will jump back to middle of arena and chase random player to eat. Notes: Use smoke on minis "place smoke a bit more close to your front so minis will have longer effected by smoke, dont use at exact at corner...... you will waste smoke AoE and minis will get out from smoke faster"

Chain Lightning: Everyone should stay away from the blue void zone in the middle. If you get close enough CL will be cast on you and bounce to nearby allies "similar to narith lightning bounce".

Hands: The ability activates in 4 seconds after minis begin to spawn. everyone will get reddish animation on their feet and each 3 seconds later similar to Ortakna hands will be spawning all time. This effect will be persisting until all minis die.

When minis are killed, Ghoul jumps back to the middle of the arena and chases the random player. The boss will move faster as each second passes and won't stop until someone gets eaten. If some other players try to get close to the boss and the called player outrun him, the ghoul will automatically consume another player who is the closest to him and until he receives any damage won't start his channeling spell. You can burst hard until he finishes the spell, be careful about DoT. When the channeling bar reaches the end, the boss does heavy arena damage, gets a temporary damage reflection shield, and a horde of ghosts will fly towards to ghoul. And it starts from the kite/jump phase until the last person able to kill the boss. Note: Dont try to hug walls you will be easy target when ghosts starts to fly towards to boss after channeling is done. Also you dont need to chase boss for to get eaten stand on the way where chased player gonna pass you, this is good way for to get eaten if your move speed is low for those intent to be get eaten.