To able to take bounties you have to kill Tal'navi and unlock "status 8". To finish a bounty quest boss have to be killed in VX mode. To remember which bounty you took type -st OR to show other players type -sh. For normal mode bounties you can kill bosses by doing non-vx.

When required boss killed in Vx mode, Bounty Points "BP" will be added to your Apt code, as for Star Glass "later on that" will be saved into your hero code. If you finish "EPİC Bounty" you will be rewarded 250 DP and go to NPC called "Bounty Master Shizaki" in training grounds and click on "Open Daily Gift Box" there are total 4 different random rewards you can get. 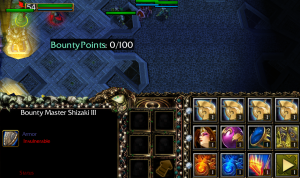 BP limit start as 100 and each time when you exceed that limit, click on "Increase the max number of BP by 100 points" by doing this your all BP will be consumed. Example you reached 114/100 it will turn into 14/200, 243/200 > 43/300 your extra BP will be transferred into next limit. When you hit the limit BP gaining will be stopped, each time you have increase the limit. By spending BP player can redeem Dedication Points "DP"  to start farming various things from NPC's called "Dedication Master Arlena" OR "Crimson Albus"

In training grounds player can spent their DP for to buy permanent bonuses or effect various things in game session only. By converting your BP "Bounty Points" into DP "Dedication Points" player can buy or spent for in the current game session, for many different things.

Fate Cards can be obtained from any VX-UVX boss kills, and its tied to your account. Difficulty, player number, players with who has Tier 9 Apt bonus effects the drop chance. To check your card collection go training grounds find Albus. At 2000 Apt you will be able to select one card only in your collection to gain bonus from that card. Bonus is effected depends on your hero level & Tier 11 Apt which increases effect further by 1.5, if you obtain FC by killing boss and you already have that card it will be converted into 300 DP automatically.