How to Kill Narith Guide

Narith, The Betrayer is the last boss within the Catacombs of the Vormur Gardens, Status 2. The encounter has a lot of mechanics and can be overwhelming at first, but can be accomplished easily even with a fresh group of heroes. Items dropped by this boss are Enchanted (Yellow) Quality Items or better.

In order to reach Narith, take the quests [13] The Betrayal and [12] The Vormur Corruption, to open the way into the Vormur Gardens.

One must traverse through the Vormur Gardens and the Catacombs and defeat all 4 Elemental Zombie mini-bosses before one can enter the final boss room in the catacombs. The Elemental Zombies can only be defeated in the following order:

The first time you enter the boss area, a dialog prompts between the Shade of Narith (5) and his physical body, laying on the bottom of room (6). Immediately after the dialog ends, the encounter begins with the Passive Phase, during which the boss does not attack or cast abilities.

There are 4 Elemental Boxes surrounding the Shade of Narith (5). Each crate contains abilities that correspond to its element, which Narith gains when a crate is destroyed. Each box shoots projectiles that do minor damage to a random player.

This phase is activated when a crate is destroyed or when the Shade of Narith (5) loses 25% of his total HP. During this phase, Narith will auto-attack and cast abilities depending on which crate was destroyed during the last passive phase.

Once destroyed, random Fire Spheres will appear randomly in the boss zone, which explode after a short delay dealing damage in a small radius. In addition, Narith will cast an Arc of Fire at the Hero with aggro (usually the Tank), so it is important that the boss is faced away from the group.

Narith gains a Bile Aura that applies a DoT debuff on all heroes. He will also shoot projectiles at random locations that spawn Poison Clouds that players need to avoid.

Slow moving Ice Clouds will start navigating the room randomly, dealing damage per second to players that are in contact with it. Narith may also cast Freeze, which immobilizes and silences a player. This ice-block needs to be destroyed to free the targeted player.

Narith gains two abilities here, which players need to mitigate accordingly. When he casts Endless Lightning, a chain lightning will bounce back and forth between players that are near enough. Heroes need to spread out far enough so that the bolt can no longer bounce to cancel this effect. His second ability, Brewing Storm, will spawn a white cloud at a random location. About 5 seconds after it has spawned, all players that are NOT under that cloud, suffer fatal damage.

The concept of this encounter is to destroy an elemental box to trigger the Active Phase, where the boss is DPS'd until he loses 25% of his total HP, triggering another Passive Phase where the next box is destroyed, repeating the cycle until the boss is defeated (A total of 4 active phases).

Although this may vary depending on the groups hero composition, you generally want to destroy the easiest boxes first and the box with the most difficult to manage abilities last. This is because each box destroyed reduces overall damage output from projectiles, making healing easier as the fight progresses. An easy order would be:

Do not stand between a box and the boss (5/6) when a box breaks because the rays that result between the boss and the box does fatal damage (see image below).

During the Passive Phase when destroying a box, do not waste mana/ability cooldowns on doing so. During this phase, the group should recover mana/health for the next boss phase; use potions, healing wards, etc. It is also possible stop attacking completely to delay the next Active Phase even longer, for example to give players that died enough time to run back - if the healing in the group can maintain it.

How to VX Narith - 'Elemental Chaos' 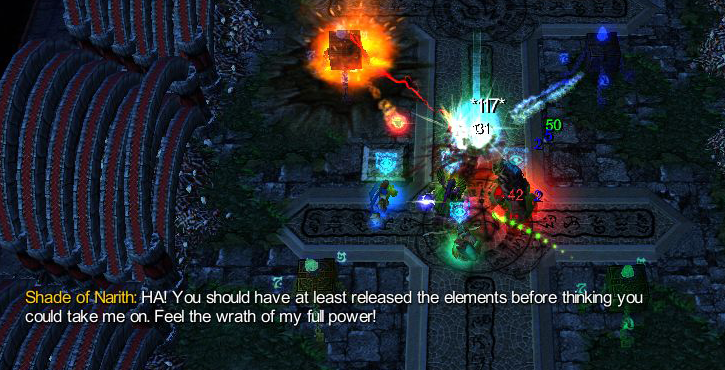 Condition
Ignore the boxes and keep attacking the boss until he starts attacking back. UVX activation will cause the boss to heal to 100% health. You need to go through a total of 4 phases (same as non-VX) with new attacks, each next phase depends on which box he is closest to. When the last box is gone too can be killed. Every time he activates a phase, all that phase's attacks will be permanently enabled even during other phases later on.

All Phases: When his HP lowered at some point %5, he gains Unholy Shield "Reflects %100 of damage taken" its lasts 4 second. You can notice green particles around him.

Poison Box: Poisons all players for 40 damage per sec.

Ice Box: Reduces all players' movement speed by 38 and attack speed by 15%.

Lightning Box: Summons 2 tornadoes, which are randomly moving around the arena. Avoid these at all costs as they do massive damage per second. They spawn at the top left and bottom right corners when this phase starts. 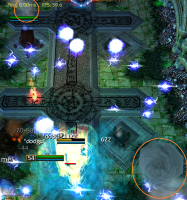 Final Note
Upon Narith deaths, all players who’s in arena gains "Death Ward" lasts 10 minutes. "Emblem of Blizzard" when geared auto attacks doesn’t kills you when "Unholy Shield" is on.