The boulder(s) that spawns in the 4th phase needs to be let alive until the boss is defeated.

Shortly after engaging the boss, tornadoes will spawn randomly in the arena. They are indicated by a small swirling on the ground before they become tornadoes, dealing moderate damage and throw you around. Players being picked up by a tornado should get healed immediately, because there is a chance they are getting thrown into another tornado.

Tal'Navi will call out "Earthlings! Heed my call!" and throw rocks at random locations - dealing moderate damage and spawning a golem. Give the tank time to pick them up and try to kill them all at one spot simultaneous. Your tank will take high damage when tanking all golems, so use Smoke Screens and focus healing on him. When a golem dies, they remain standing and become black in color. 10 seconds after their defeat they will explode in a small AoE dealing lethal damage (1k).

VX hint: When entering this Phase for the second time and your Tank is being chased by the boulder, it can be beneficial to get hit by the boulder intentionally, so the boulder chases another target and the Tank doesn't have to worry about it as he is picking up Golems as well as to not accidentally kill the chasing boulder while AoE DPSing the Golems. 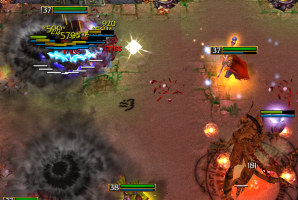 Either the outer or the inner ring of the area will pulsate with "Dust & Sands", after a few seconds it will deal lethal damage to every player standing in it. Afterwards "Dust & Sands" will change spawn location. Repeat this 4 times while dealing damage to the boss. The spawn location can be completely random, for example it can be spawn in the inner ring all time without any location changes.

VX hint: When standing in the inner ring, the boulder will not be able to enter the area.

A attack-able boulder spawns and a random player is being announced. This player will be chased by the boulder and it will deal high damage, a knockback and change it's target when it reaches the player. However when other players touch the boulder that aren't being chased, they still take the damage and knockback without it switching targets. Another way to make it switch targets is to damage it below 75/50/25% thresholds. Furthermore, the lower the HP of the chasing boulder is, the slower it will be making kiting easier.

Charging Rock: A rock spawn only at the edges of arena and slowly begins to get bigger later randomly flying towards to a strait line, it does moderate damage & stun whoever gets hit by that.

VX hint: The boulder will take 75% less damage from AoE skills in the Phase 5. Making it easier for you to nuke the boss as hard as you can. When the fight takes too long, Tal'navi will reach the 4th Phase another time, spawning a second boulder. When the second boulder spawns, the first boulder heals to full HP and both boulders will gain a speed boost. This is very difficult to deal with and it is advised to simply aim to kill the boss before the second spawn. 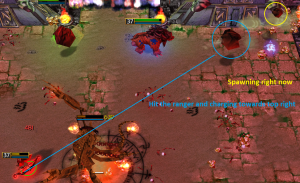 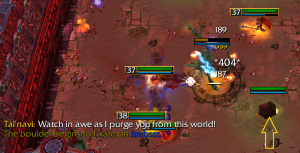 1. If it hits you, it hurts bad and knocks you back.

2. When it hits the player it is chasing, it switches the target.

4. It switches the target periodically.

5. Whenever it switches the target, it picks a random player.

6. The boulder will hit players that aren't being chased, if they run into it. It will keep chasing it's target.

7. The boulder takes reduced damage from AoE skills by 75% as long as Phase 5 is active.

9. (VX) When the 2nd boulder spawns, the first one will heal to full and both boulders will move faster than the initial one. Either of them will chase a random target. 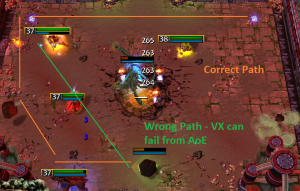 A notification will say "Tal'navi is exhausted and vulnerable", in this Phase the Boss won't use any spells and take 25% more damage, while the boulder takes 75% less damage from AoE spells. This will go on for 10 seconds, then Tal'Navi will knock everyone back with a stun (1.5 second) & damage afterwards repeat phase 1. 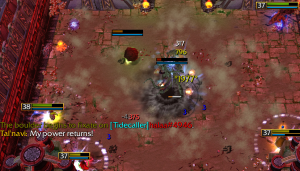 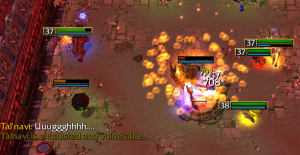 VX hint: Before boss knockback everyone it is advised to use Smoke Screen on boss.