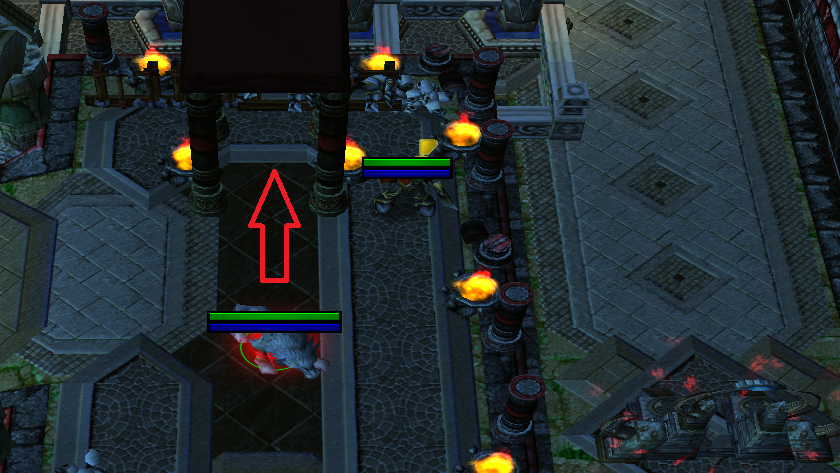 How to enter boss arena 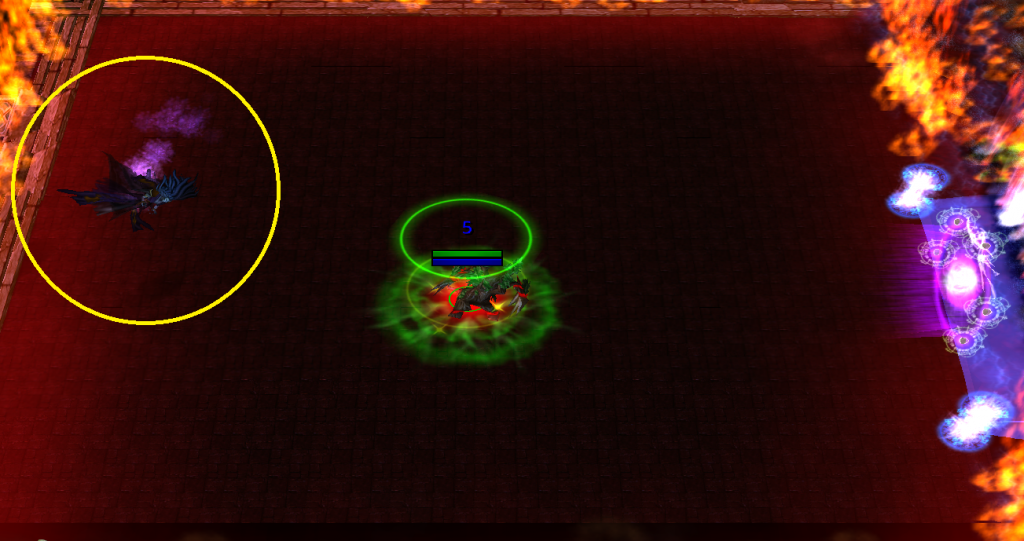 When you enter the arena, a ghost will spawn and circle around the middle, ghost applies debuff every 15 seconds on the entire team.

You have to finish his total of 8 mini-games by entering a new portal each time to begin a new game. After clearing all games the bridge will open and players must cross it as soon as possible. Those mini-games are totally randomly generated each time, there is no specific order.

When those runes spawn you have to act very fast and kill them by order BLUE>RED>BLUE and so on. If you kill red first it's a team wipe, if you act slow "you have 2-3 second" – it's also a team wipe. For each destroyed blue rune your team gets a buff similar to what clerics' "R" skill does and that will allow you to kill red runes without wipe at all (however, the buff lasts only 3 seconds). For each destroyed red rune a dangerous hound will spawn and the tank should aggro them fast as they do high critic hit damage. Each dog applies approximately -120 HPS debuff for those who kill it. There will be a total of 8 runes. 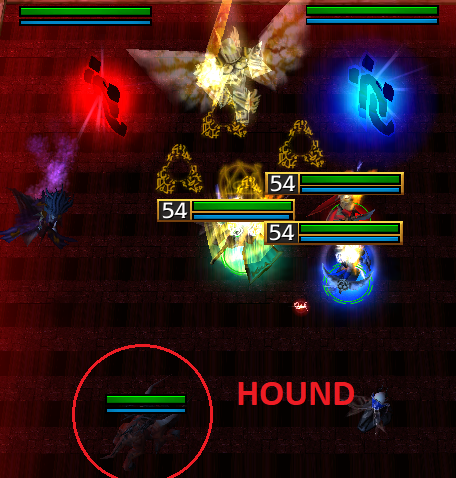 Among them you have to find the real one. Mines do high damage upon destruction so it's recommended to restrain from using AoE spells for everyone but a tank (you could also buff your tank). When you find the real mine you will notice something like "9XXX" with a countdown on it (the first number must always be 9 and the rest can be any number used to pass the mini-game). 9000/9999 HP If you over DPS you can heal the mine. In case the main mine is destroyed accidentally or its HP had the wrong value when the countdown finished it's team wipe. Mine also attacks the person who gets aggro so be careful. It's recommended to deal the last 1-2k damage (prior the target HP) by one player who has no DoT and reflect damage, otherwise, it's very easy to overdamage the mine and fail the entire encounter. Stand on purple animation until your name is called/aggro it so skull will slowly follow that person, at the same time everyone must group up while staying within very big circular lightning effect and mostly focus healing that person along with other team members. Move to top areas when lightning stops.

The orb is unstable! Give it to someone else! Within 4 seconds someone has to hug that person to grab the orb and run away into an isolated area; an entity will spawn on their head and generate shock waves around them while the rest of the team stays away from that person (except, maybe, healers, who might need to heal that person).

Tank: Keep your life more than half.

Healer: Heal that thing fully don't damage at all.

The orb starts releasing its power! That's when you need to gather again. Also, avoid touching the skulls as they do rapid damage. Check 2nd picture below as you can see 2nd skull randomly picked me to follow and i took rapid damage when touched it. 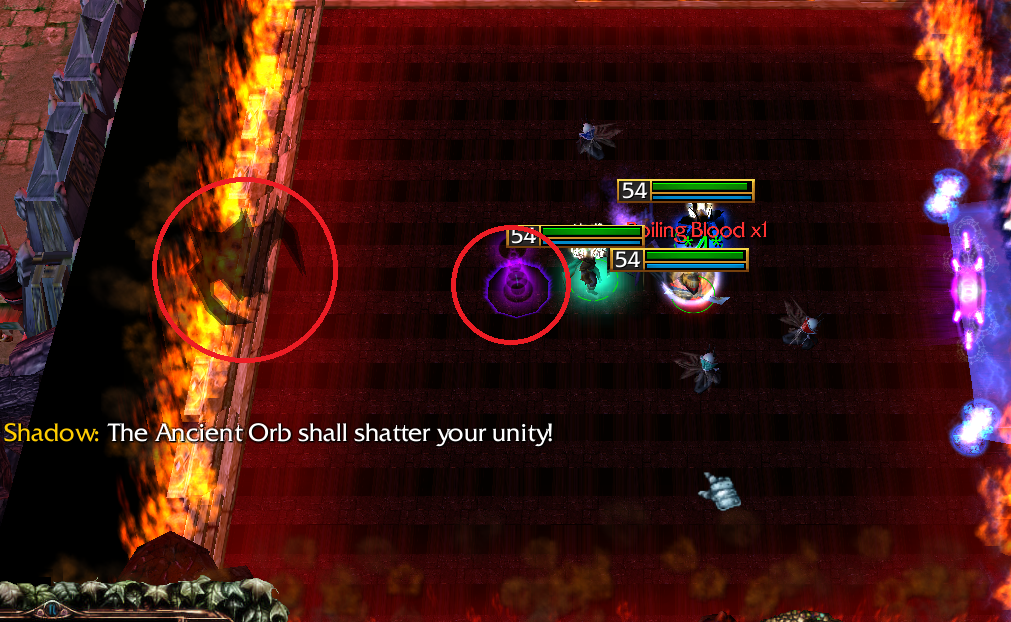 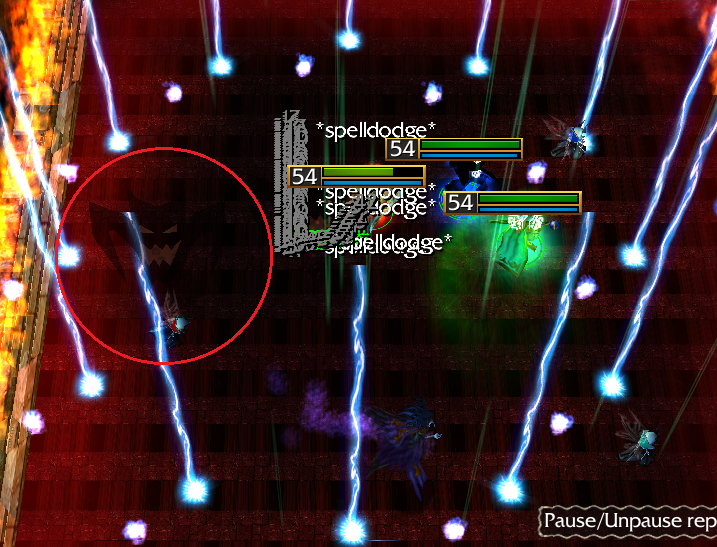 Tank stands on purple animation again after getting aggro he must pull the shade close to the torches range to make shade vulnerable to attacks. You will 5 seconds to kill the shade if the torch has been destroyed. You can always lure shade to other full HP torches and repeat process until he dies. After shade dies its corpse and each pillar will shoot fire bolts in all 12 cardinal directions around them. Torches heal themselves over time. A total of 4 cages will spawn randomly in outer areas along with 2 fire rain areas, which travel in a circular pattern. Also, random fire bolts will fly on the arena, a tank must auto-attack the cages to push them into where fire rain zones to purge their mana and destroy them. Each hit on cages will make you take some damage and burns your mana. When cages are properly positioned, you should stay in a safe area until they are destroyed. Worth mentioning that cages also gain a little portion of their mana so at Legendary & Hardcore modes the phase takes much longer. 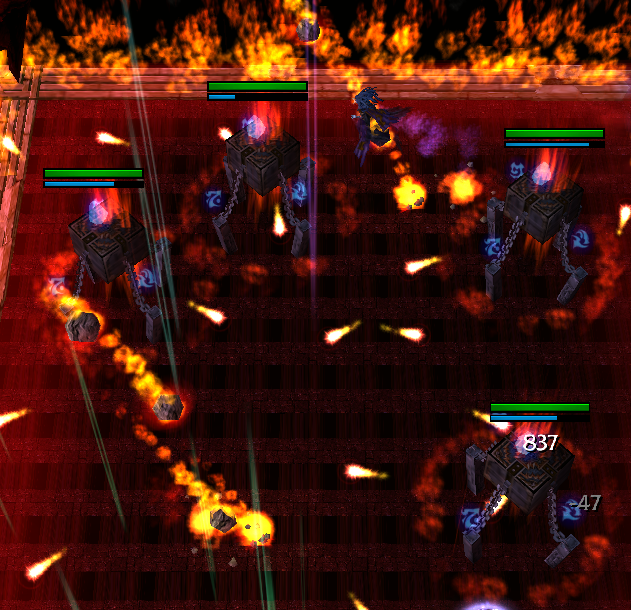 Tank goes to the left and pulls all phoenixes. Towers should be killed almost same time while keeping their HP close to each other, if you damage one tower too much both of the other towers will reset their HP. Upon tower description, all player's mana will be depleted and players will be left at very low HP, therefore high degen items might kill you instantly. 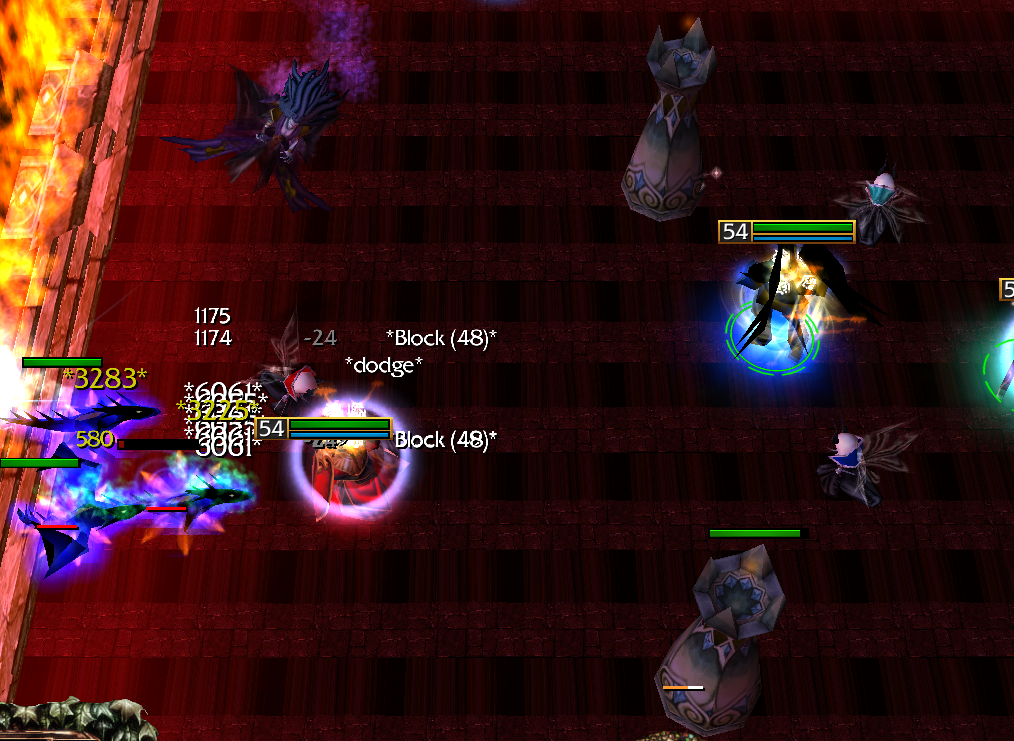 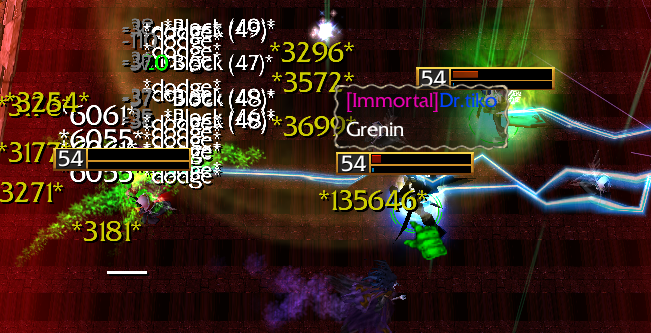 Dozens of apostles blue links on girl to drain her hp to kill, heal the girl while killing all apostles. Whenever each apostles hp reaches 50%, fire bolts scatter around the girl so don't get close so much to her, same time blue links drain her life also will be disabled. The tank must  aggro them whenever they stop draining and start to attacking your team. When last apostles dies last time fire bolts will be scatter around her. 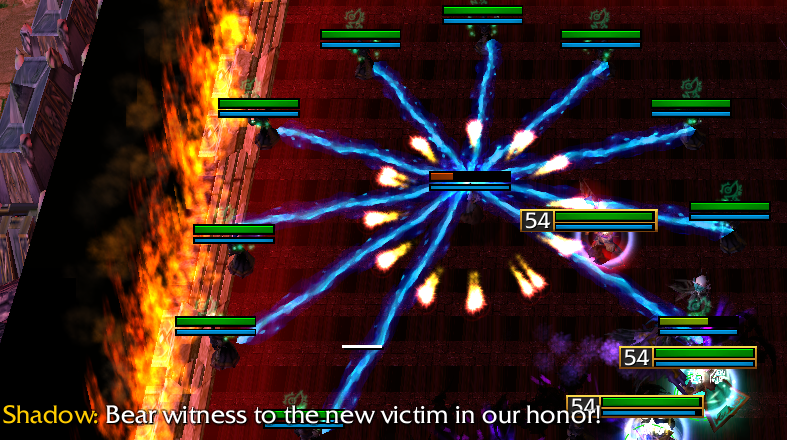 A total of 4 gates appear randomly at the arena, which keeps spawning "Inner Temple" mobs. Destroy all gates. 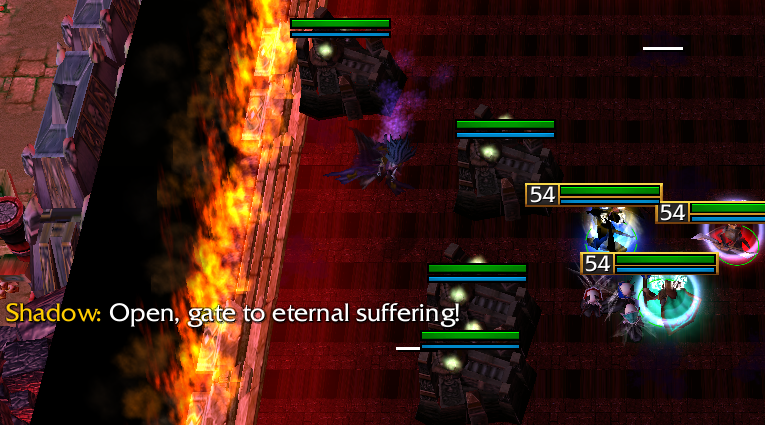 Cross the bridge ASAP when all 8 mini-games are finished.

Red Bolts: You will see a lot of them (which deal damage, push and stun you) flying around, which should be avoided as possible. 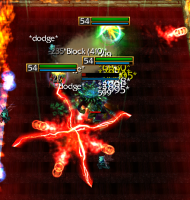 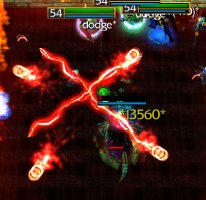 Twisting Wave: Those things fly towards players, avoid them as they do rapid damage. Can be killed. Legendary 1 / Hardcore 2 of them spawns. Start running back again when bridge reopens. After finishing the fight with Zanatath, the bridge reopens again, you should come back to the mini-game area (don't get too close to the left wall otherwise you will be forced to leave the arena and the boss will enter the last phase for VX).

At Legendary & Heartcore Mode; Players will be purged/dispel by Zanatath before every fight and before the totem phase. Check picture top at HC mode when Zanatath dispel us 2nd time after fight, also all players take damage.
Ancient Totem / Blue Totems
A total of 3 blue totems will spawn. This is a DPS race, you have to damage all totems to make them reach full HP. Totems degenerate over time, therefore you need to focus all of them simultaneously. The final phase starts as soon as totems are banished. Afterwards, you will have to do attack the totems again to destroy them completely. Die & disappear -player name- / Tank job what he has to do;
Go near the left wall and aggro all mobs. When the final phase starts you have to keep an eye open for reddish/orangish orbs, which appear at the left wall and shoots the called player. The tank must stand between the orb and targeted players to prevent them from dying from projectiles. The tank must survive from that by picking spawned runes on the ground to get buffed (runes give temporary armor buff). If the tank is the one who was called, you should position yourself in a way that only makes you take a hit because orbs have a piercing effect even if you block lethal damage.

Lightning Strike & Fire Bolts
Random players sometimes get targeted by a lightning spell and later shoot fire bolts in all 12 cardinal directions from it. There is no text warning about that.
PS: In addition to HC mode, random fire rain will be cast vertically or horizontally, afterwards, a laser effect will appear on those lines and do damage to players who stand on them. An NPC called Hessel will be appearing at Emerith inside the boss museum room. He will allow players to get 2 free items. 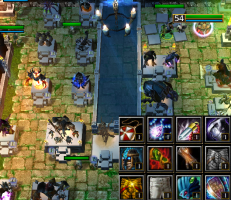