This is the second boss of the Ancient Orc Tomb, at the end of the Frost Wing, one of the two bosses required to proceed to Karavnos.

You can reach Karnos by clearing the AOT Frost Wing (east side) or, for those with status 6 or higher, using the portal destination at the AOT Portal Master, which brings you to the end of the east wing (500g).

At the end of the Ice Wing, players will find an empty room with a frost orb in its center. To initiate the mini-game event, players must stack in the center of the room where the orb is located, spawning lines that form an "X" across the room with the heroes in its center. Here's what you need to know to accomplish this event: 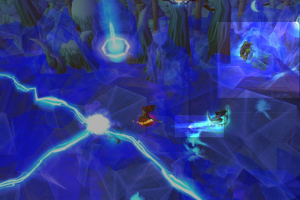 This debuff is applied to all heroes simultaneously every several seconds. Each stack reduces the units attack and move speed. At 8 stacks the unit becomes Frozen Solid.

A unit that becomes frozen solid gets trapped in an Ice tomb and is stunned for the duration and loses all Freezing Cold stacks. While within the ice tomb, the unit is immune to Blizzards and Freezing Cold. The ice tomb can be destroyed to free the hero, however, if the Ice Tomb is not destroyed within a certain time-frame it explodes, dealing AOE damage around it (but not to the trapped unit) and the trapped unit becomes unfrozen.

A frost orb spawns at a random location and after a short delay, Karnos casts an Ice Path at its direction, dealing damage to all units in its path and Freezing (see Frozen Solid above) them. 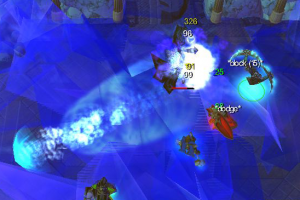 Karnos summons a Blizzard that spawns on a players location and slowly begins to follow the player. Blizzards deal damage per second to friendly heroes, but heal per second to Karnos. In addition, units hit by Blizzards receive stacks of Frostbite debuff.

Each stack of Frostbite increases damage by 4 and reduces attack speed by 1%. Heroes with this debuff also take additional damage from Blizzard per stack. 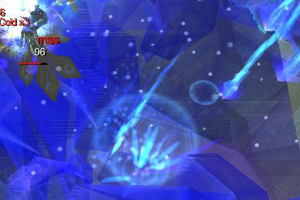 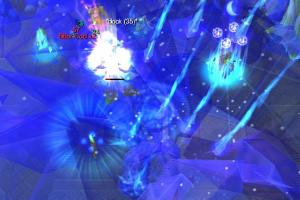 The trick to defeating Karnos is is by managing the Freezing Cold stacks so that not everyone is frozen simultaneously when the stacks reach 8. To do this, some heroes need to reset the stacks by becoming Frozen Solid earlier, which can be done by purposely standing in an Ice Path.

Karnos - 'Frostbitten' - Defeat Karnos while he has 50 or more stacks of Frostbite.

Purposely allow Karnos to gain stacks of "Frostbite" by letting him stand in Blizzards.

Condition: Same condition as VX. However, the stacks required is doubled, and they will increase Karnos' attack speed instead of decreasing it. They will also add dramatically higher damage (at max stacks, about +6000 damage).