Naztar is the main boss of the Temple of Sanctity and must be defeated before one can face Karrix, the final boss before reaching Status 5. Unlike most other bosses, Naztar is always killed in VX mode by default, thus always has a chance to drop an epic item. Naztar also has a UVX mode kill, for a useful all-classes relic item.

The boss is located within the center room of the Temple of Sanctity, which can only be opened after both the north and south wards of of the template have been cleared. This boss can also be ported to from the Special Portal Master at the cost of 5,000G, for heroes with status 5 or higher.

To reach the Temple or portal master, one must complete the Grom Gol Trials, also known from the quest [18] The Valley of Trials

There are 4 abilities that Naztar will use through the encounter..

1Painless is a buff that prevents Naztar from taking any damage from all sources. The buff expires as soon as he casts Mana Shield and he will be able to take damage after the Mana Shield is broken.
2Mana Drain Naztar will stop attacking and cast a Mana Drain at all players simultaneously. After a short channel, the affected players will lose a portion (around 10%) of their total mana, and the boss gains a Mana Shield.
3Mana Shield While the Mana Shield is active, all damage dealt to the boss is dealt to his mana pool instead of his HP. When his mana reaches 0, 25% (up to 40% on higher difficulties) of the total damage is dealt back to the players.
4Mirror Image
An invulnerable mirror image of a player is summoned that auto-attacks the nearest hero. 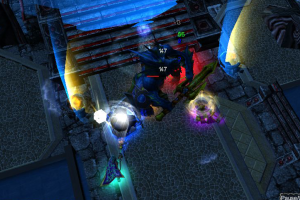 The encounter with Naztar can be a tricky, especially for new players. Each attempt can vary in difficulty, depending on which players are mirrored (4). Here are some general strategies that may aide in defeating this boss:

All players must be present in fight whoever is not in arena will die. Before warping only 1 player should warp first and opens the gate at your right side and stays in there "not inside of arena limits" , later all players should warp 1 by 1 taking turns after only each text message disappears. Trying to warp same time or in a row will trigger the fight instantly which will lead to wipe.

When everyone is ready enter the arena and stay close to each other. A large blue rectangle will appear in the arena and all players must stay inside it or take rapidly heavy damage. This rectangle will move around, forcing everyone to constantly move with it. Rectangle will shrink over time, eventually killing everybody if it gets too small.

Mana Shield: Like on VX, he will have a blue link on each player and enable his shield. For to get rid of the shield, either use only auto-attacks or let the tank pop the shield for you by using his skills (backup him with buffs). During linking you can always DPS but be careful with your DoT attacks before the shield is on. Each shield explosion & reflect will do more damage than the previous one. Players who use skills take more damage (scales in %). When shield is pop up deals %of hp damage in a small AoE in addition to regular explosion damage.

PS: Use Magic Resistance elixirs until shield pop and change back into DPS ones later. The shield popup damage formula and damage reflection mechanism are very confusing: hardly ever you can take full damage as if you were dealing damage with skills (while other players who use skills take will regular amount of damage). Only pure damage can penetrates the shield.

Water Waves: Every 10 second a wave will be sent in a straight line from the throne area to a random location. Those waves do ~600 damage and lower your movement speed temporarily "damage depends on your magic resistance".

When Naztar defeated, a massive waves of water will emerge from the left side "throne" to the middle of the arena by covering the whole area. Run to the right side of the gates.

Naztar is always VX mode, thus can drop an epic item by default.