Can kill anytime no any special requirements.

How to Fight & Abilities

Cleave: He has very wide cleave attacks and can one shot any other players easily.

Fissures: He raises his hammer towards up and cast them around randomly. After he uses KO fissures will vanish. Fissures are obstacles and you cant pass through them only Villard can ignore that and moves freely.

PS: Tank should always keep the boss middle, if you lure him to near edges when he cast fissures you will get trapped and die from KO when he casts it. Some cases you might have to run bottom when KO casted there are no other free space, because of that so rest of team have to move according to that. 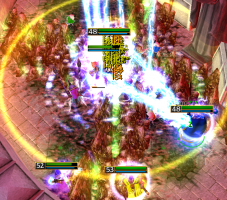 K.O or Ban Hammer & Summon: After 8 second later fissures he raises his hammer towards up and slams his hammer on the ground rapidly (each hit stuns you which makes nearly impossible to escape) and knockbacks everyone. It does heavy damage and reduce everyone’s move speed, whoever in his melee reach range instant dies. After that Villard reset position to middle of arena and tank should also go middle asap for avoid getting trapped by fissures when casted if you near walls. Each 2nd time when he cast that skill "Magic Elemental Master" spawns from middle, it can swap position with random player and you will die instant from Villard’s cleave attack, make your priority to kill it asap.

Few Tips how to avoid: If Villard's attack speed doesn't greatly reduced after 4 hit he casts it, or count to 8 second and run if its slowed hard. Either watch his hammer animation. His first time KO casting 10 seconds after fight starts.

PS: For KO use "Sober Guard" to escape from his rapid mini stuns. For Elemental Master if its behind the boss even if he swap with someone unless you move the boss its not risk, but if it is tank should position the boss according to that in case swap happens. Be sure at least one player use Smoke Screen at summon phase. You can run back to entrance to avoid KO if you there are no other means of escape and afterwards enter back to arena asap before Villard get out arena too o/w it will reset the fight. 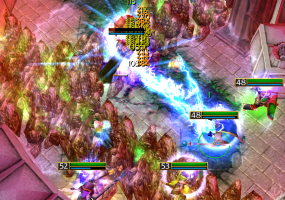 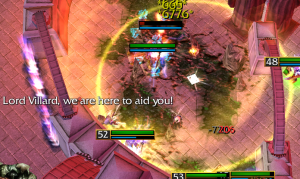 Everything is same except you need very high HP & Magic resistance.