Vjaier is thefirst boss of act 4 and must be defeated before one can face Warlord Crueltis, the next boss.

The boss is located at the southeast corner of the Jahara desert. A quest can be picked in Grom'gol by walking into a portal near the waypoint to lift the barrier leading to Vjaier.

Vjaier is disabled when first reaching him. The 4 obelisks must be cleansed before Vjaier becomes active. Interacting with an obelisk causes an elemental miniboss to spawn. 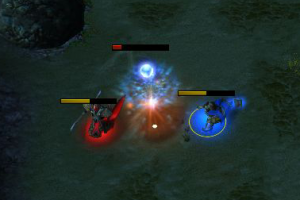 After vacuuming, the focused player must run away from the group, bot not far enough, so the healer can reach. Also, the healer must be prepared to heal the tank too because the tank will die from auto attacks if not healed. Keep in mind, that as a healer, only the tank and the focused people needs to be healed, the others are safe to stay at 1hp. 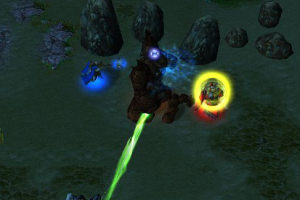 The earth elemental has 2 spells:

The tank's job is to generate as much threat as possible on the miniboss before you start taking too much damage from the ever increasing number of mini elementals. At that point, the tank needs to start kiting in order to avoid dying, while aggroing any minions spawned. 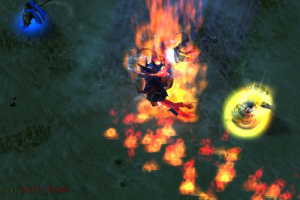 As a melee, players want to step away from the miniboss as it starts charging in order to avoid dying from its aoe. To deal with the bomb spell, just make sure players keep distance from other players. at all times. 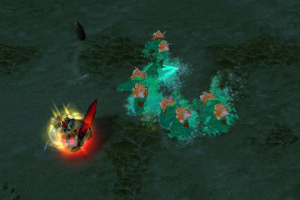 To defeat the water elemental, one must go through 5 phases in total (3 DPS and 2 minion phases). The fight begins with a DPS Phase and proceeds as follows:

In the DPS phase keep the boss at the right wall. Make sure to keep the tank healthy, because the water wave will deal huge damage.

When the minion phase starts, everyone but the tank runs to the left side. The droplets wont reach there, ensuring nobody gets hit. As a tank, your job is to aggro all the mini elementals, and kite them. Keep in mind, that as they die, they leave a puddle of water that does huge ticking damage.

The boss has 2 phases. In the first phase, players DPS the boss while dodging tornadoes (and lightning orbs), which lasts for a minute, and in the second phase, players have to deal with various adds. Since Vjaier hits a lot harder, than previous bosses, the tank should have at least full enchanted (yellow, excluding weapon) gear, before attempting to kill it.

DPS phase
In the DPS phase, players have to deal with the following abilities
Add phase
During this phase, the boss gains a 50% damage reduction shield, no longer summons tornadoes and power orbs, and no longer attacks the tank.

The boss returns to DPS phase shortly after summoning the 3rd portal.

This encounter is not difficult, it only tests your awareness of your sorrundings. Getting caught in a tornado quickly melts players, especially on higher difficulties, and standing on a lightning orb can kill you very fast, if players dont reach quickly.

The strongest damage dealer(s) need to stand in the power orb beams, so they deny the boss the buff, and to increase their damage. Gaining the buff means they will take increased damage from the damaging aura, but that should be easily healed.

In the add phase players need to kill the portals quickly, so they dont spawn any centaur adds. Melee heroes need to be careful with the spawned lightning orb, since it will immediately start doing damage in melee range as the portal dies.

For VX mode, players need to allow at least 90% of the energy orbs to hit tbe boss.

To deal with the VX mode, players need not to stand in the beam, but if things get tight while dodging tornadoes and orbs, its perfectly fine to run over the beam and take a stack, since only 90% of the orbs need to hit the boss.