Muarki is the final boss of the Ancient orc Tomb and must be defeated before one can face Vjaier, the next boss. Killing Muarki grants you status 7, which allows you to teleport to Karavnos at the portal master. 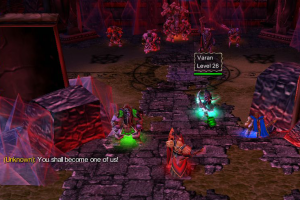 The enviroment is also a hazard in the fight. 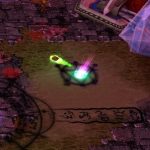 The circles on the ground shoot damaging orbs

The entrance area of the fight will be

engulfed in flames, preventing players from escaping the fight.

Additionally, there are 2 circles on the ground, which will shoot orbs, that deal a small

amount of area damage on hit.

Players fight the minions in the following order. 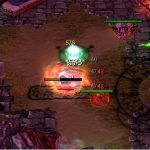 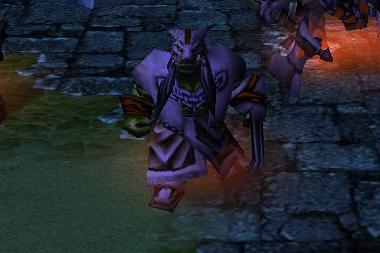 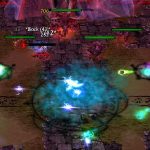 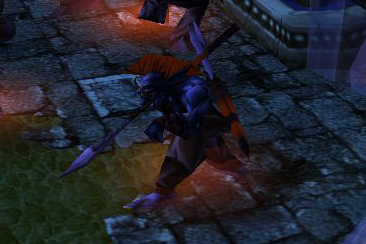 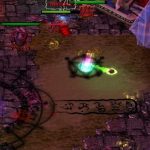 The yellow things on the ground are the traps 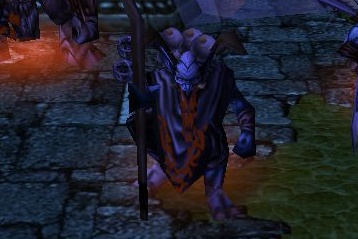 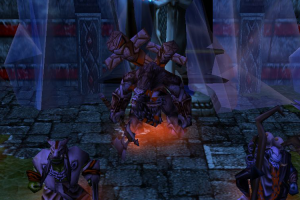 Killing the minions is easy. Run away from whirlwind, do not step on traps, and aoe the wards. Lure them to the top right corner, and kill them all there at the same place. That way, if you keep the boss there, you can aoe the adds and do some damage to the boss too.

When Muarki activates, be careful about his cleave, only the tank should ever stand in front of the boss. This becomes a problem when Muarki uses charge, just make sure to run away from the boss.

Never tank the boss near one of the circles on the ground, because when the boss uses Pull, players will be stunned forr several seconds, and not being able to dodge orbs combined with the damage from the knock can be lethal. 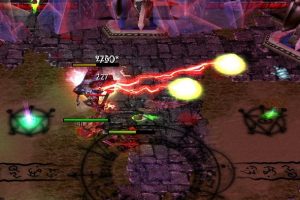 The boss will start resurrecting the minions when he reaches 60% hp. At that point, the

boss will not move or attack while channeling. The minions will be resurrected in the same place where they died, and in the same order as you fought them in the first phase. Focusing them very fast is essential, since the fight becomes chaotic if more are alive at the same time. Using smoke screens is recommended.

After killing the minions, the fight is essentially won, because nothing else will happen other than the 2 spells used by Muarki.

To trigger VX mode, all minions must be alive when Muarki dies.

The easiest way to do it is to separate the minions and the boss. Kill the minions in the top right corner, as you usually do, but when the boss is approaching 60% hp, take him to the opposite side of the room. Damage dealers stay on the boss, and the tank goes to the minions and aggros and tanks them there. With good dps, the boss should die before becoming active again, or shortly after that.

Adds in the top right corner, boss in the opposite

The entrance area of the fight will be engulfed in flames, instant kill players who tries to escape.

2 circles on the ground, which shoot orbs, compared to vx does 400 around damage on hit. 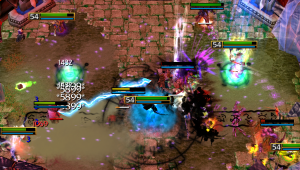 Minions and Their Abilities

They all have same VX spells, in addition they gain new abilities and hurts the team badly. Minions must be killed at certain spots. As for boss should be killed at middle. So, everyone able to help to kill the boss and help to each other. Positioning and depends on your class which minion you planning to take is very important.

In addition he spins most of the time and hurts like hell. He can run towards random players while spinning so you should avoid touching him. He has reduced ability damage taken %18. Kill and keep him at top left corner all time, if he go after other players tank should remain at his position.
Class who should get aggro: Tank roles In addition he casts Bloodlust on all allies and gives them attack speed buff. And cast some kind of reddish link spell on players in his range (it seems to be mana burn). He has ıncreases ability damage by %12. Kill it at bottom left corner.
Class who should get aggro: Doesn't matter who's has aggro on him.

He applies poison stack up to max 10x stacks on a player who has aggro, each stack does debuffs you by -120 health per second. He sometimes can debuff other heroes too with few stacks. His attack speed increased by %20, kill where he stands in first place. Poison trap also does 800ish on touch and DoT 350ish damage.
Class who should get aggro: A very strong healer or tank should aggro him. In a 6 player game, a free healer can run between players.

The only different thing is that his serpent wards do more damage. Kill him at bottom right area.
Class who should get aggro: Self-sustain heroes can aggro on him.

When he loses 15% HP bar, he will begin to revive minions where they were killed. Each player should take their position while keeping aggro on their own target and shouldn't move from their position. Minions will immediately start to use their new skills.

When boss say Do you see your end, "playername" now does serious damage.

Minions passive abilities will not be activated and they will only cast their VX spells instantly.

UVX note: When minions revive ALL aggros reset. Don't worry about pre builded aggro on them.

When the boss dies, he will revive back for the last time. Minions and boss will get Earthen Shield (damage resist buff) & bloodlust. And you have limited time to kill him 30 second or so, if you fail to defeat the boss within that time he will pull everyone to him and cast an arena spell to wipe everyone.