Sand Golem is the last encounter in the Jahara Desert, Status 3. This boss is required to progress to the next town, Grom Gol.

Starting from the Tol'Cam Gates, Status 3 Portal, only the [15] Missing Karavan quest is needed to reach obtain the Orb of Disruption that summons Sand Golem. But to gain access to the desert, you will either need to accept the quest [16] Centaur Lords (which is also required to progress to Status 4) as well, or is the Quest [27] And The Next Problem Is... from Grom Gol, which would require Status 7.

Upon finding the missing Karavan, south-west of the desert, one must take the next quest [16] They're Coming Right At Us! that spawns the Mini-Boss at wave 7, which drops the required Orb of Disruption.

The Sand Golem is summoned in an area west of the first Centaur Camp north of the Karavan (the most bottom-left Centaur Camp). The player with the Orb of Disruption in the inventory simply needs to approach the dust cloud to initiate the Boss sequence.

Sand Golem has 4 abilities that he will cast in the same order before repeating the cycle.

1The sand will purify you, playername.
SG faces the named player and channels for about 3 seconds before releasing a shock-wave in a straight line, that deals heavy damage to heroes in its path.

This is the first ability SG will cast, which he does a few seconds after you engage him. The shock-wave travels slowly and is easily dodged by moving.

2The dust storm comes for you, playername.
A tornado spawns on the Sand Golem that slowly starts traveling towards the named player. As the tornado moves, it leaves behind a dust-trail that does damage-per-second to any players caught in it.

The player named needs to immediately kite the tornado, preferably along the wall to not cause damage to other players in the center. If the tornado remained anywhere near the boss, he gains an increase in attack speed.

3Rock Shard Spawnling: I'm coming, master!
When this dialog appears, a Rock Shard is spawned along the walls and starts slowly walking towards Sand Golem.

When the Rock Shard comes in contact with SG, the following dialog appears RRRAAAGGH!! More... Power...., and the boss regains HP and a permanent Attack Damage increase. In addition, a dust cloud that deals DPS is spawned at the location of the where the Rock Shard touched the boss.

This can be avoided if the Rock Shard is destroyed, or the boss re-positioned to delay contact.

4This desert will become your grave!
Shortly after this dialog appears, the Sand Golem tosses a boulder at ALL players that stuns for 2 seconds and deals a certain amount of damage.

This ability is the final ability of Sand Golem and the only one that does damage which cannot be dodged. 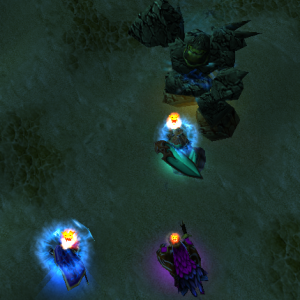 The Sand Golem boss encounter is pretty straight forward and can quickly be mastered with some practice. An important thing to consider is that all ability damage can be avoided, except from his 4th ability. Here are some strategies in defeating SG:

Maximize DPS and Minimize Movement
The less time spent moving, the more time is spent dealing damage to the boss, so to its important to know the timing of the bosses abilities and positions of your teammates.
Positioning
Tank Boss in the middle if possible to keep him away from Rock Shards that spawn. Spread around the boss and avoid standing behind other heroes, especially the Tanking hero,to avoid that multiple players have to move if only one person is targeted by an ability.
Handling Tornadoes
When the tornado spawns, the named player should immediately move to a wall and kite the dust trail alongside it, with the intent to keep less extra damage from other players. The tornado will last until after SG's 4th ability is casted, which means whoever is kiting will get stunned for 2 seconds before the tornado expires, so make sure to keep a good distance between your hero and the tornado.
Kill the Rock Shard Spawns
What makes the normal SG kill easier than the VX mode kill is that players may kill the Mini-Golem spawns before they reach the boss. Due to this, the fight may go on practically forever if the healer can keep the tank alive and the other heroes know how to dodge abilities safely. Ranged DPS heroes are most effective in killing adds, since they will require less movement than a melee DPS.

Defeat the Sand Golem without killing any of the Rock Shards that spawn. 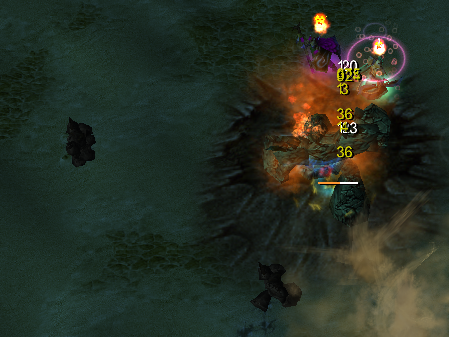 Kiting boss away from mini-golem spawns.

The key to defeating this boss is surviving everything it throws at you. To survive, players need a large health pool, because rocks do ~420 dmg without magic resist. Sacrificing damage for more hp is not a problem, since the boss has low health pool, and there is plenty of time to damage down the boss before he eats the 13th mini. Also make sure to have enough HP to survive from pure damage boulder when boss dies.

In addition to VX condition, you have to feed exactly 13 mini golems to trigger UVX. You will see the text You are no match for the power of the sands! upon eating 13th mini golem. The boss will grow in size and gain +9 damage per each golem.

Mini Golems / Rock Shard Spawnling  ; Every time he eats a mini he'll leave behind a sand zone at the spot the mini was eaten.

All shall be purified by the sands!

Instead of declaring a specific player to shoot a sand wave at, he'll shout "All shall be purified by the sands!" and shoot sand waves in all 7 cardinal directions around him. Boss right side has have more free space, so when boss casting that player can stay at his right side area to avoid more easily "left picture between red lines". Or player can lure boss to near walls "further area" when boss cast that players can run to opposite side to avoid easily.

At 5th mini, he will start summoning 2 tornadoes. Each tornado follows a different player, and if the tornadoes collide with each other instantly killing all players. 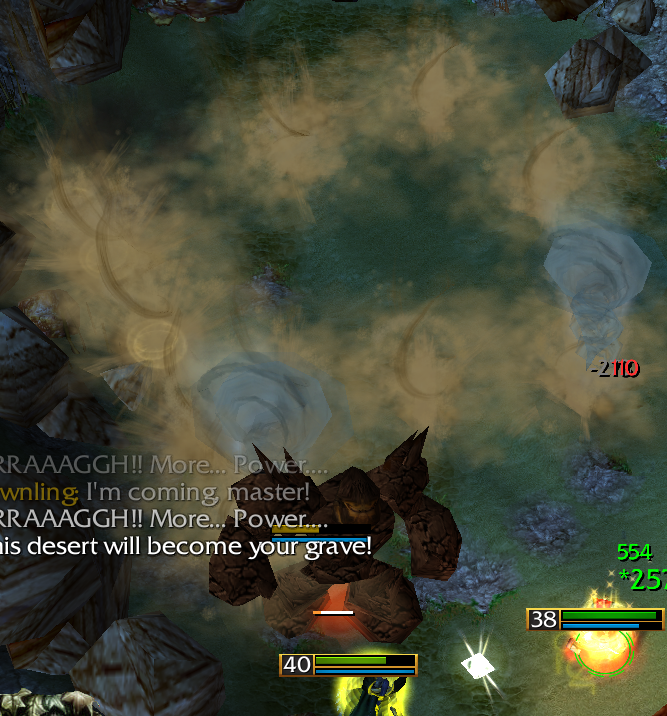 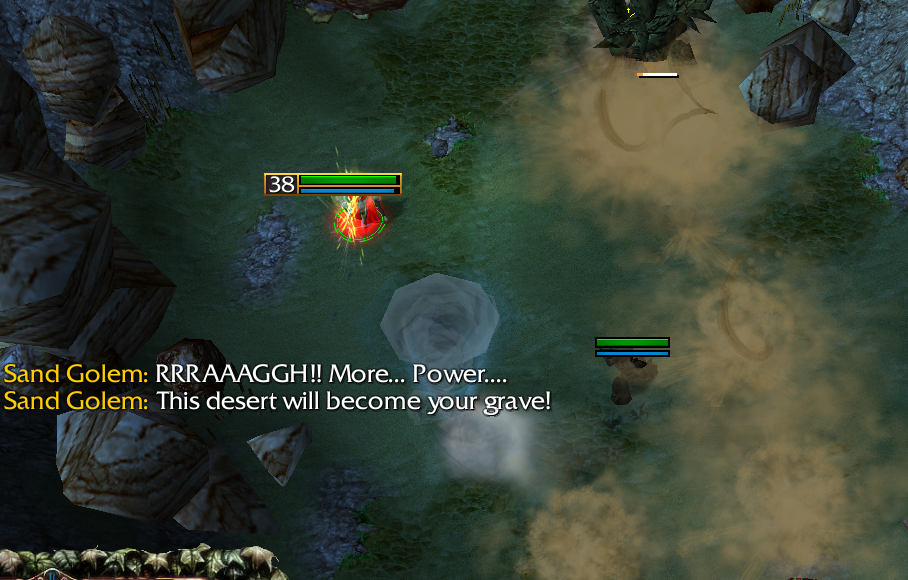 Upon death, he'll throw 900 pure damage boulders at all players. And stuns for 10 second.